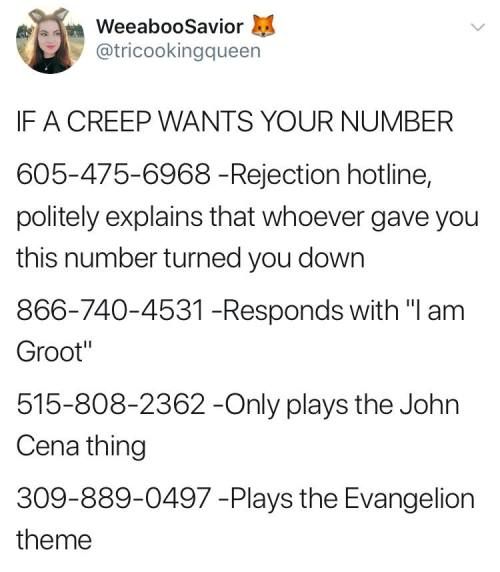 The name says it all – these are prank call numbers you hand out to people you don’t want to see again. A great response for the creepy guy or girl at the bar, gym, or anywhere really.

See also: How to stay high all day off the weed

You are bound to meet people who clearly can’t take a hint. Let them do all the talking for you and explain that “Hey, he/she is just not that into you.”

It starts off mild, but later on, the script gets pretty heavy-handed. My favorite bit? “Please take the hint and accept the fact that you are rejected. And then get over it. And please do your best to forget the person who gave you this number because trust us, they already forgot about you.”

You can’t get any more straightforward than that!

The first number may have a bit of bite to it, but it can’t compare to the Mary-Sue Rejection Hotline. The Mary-Sue hotline is the perfect response for the “alpha male” types who can’t take no for an answer. Any call or text to this number will get the same script:

“Oh, hello there. If you’re hearing this message, you’ve made a woman feel unsafe and/or disrespected. Please learn to take no for an answer and respect women’s emotional and physical autonomy. K, THANKS.”

I doubt they will bother to stick around after that. And if they do, time to get a restraining order.

The Loser Line is a number set up by a Seattle radio station. Here, hundreds of calls come through with tales of woe and rejection. Unlike the other two, there is no voice on the other end, so go all out and vent.

Sometimes these recorded messages will make their way on air. So don’t drink and dial! You don’t want to be the sad SOB who can’t move past rejection. Though I have to admit it would be hilarious. Hmmm, you know what? Make the call.

Real phone numbers for not so real places:

See also: Hot Spoon Mosquito Bite Treatment [Does It Help and How To]

Make your way to the North Pole and talk to Santa. I doubt anyone older than 5 still believes in him, but it can add a bit of magic around the holidays. The magic of the internet, that is. Who knew the North Pole would have such great reception?

You can also use this for pranks – funny script, unexpected twist, and Santa? Who wouldn’t want to give this a call? Send the number to the kids in the family or swap the contacts of your friend.

Who doesn’t want to relive the magic of the Harry Potter Universe? If you didn’t get the standard owl letter, muggles could try this phone number.

Warning: Do not give the number to impressionable young readers. Only call this number when you can tell the difference between fact and fiction. The tantrum afterward isn’t worth it. Trust me.

Just like Sex Addiction Intervention, the Psychiatric Hotline sounds like a customer service line. Riddled with jokes at every turn, this phone number is sure to put a smile on your face.

What is the reject hotline phone number?

Rejection Phone Numbers To Let Someone Down Without Confrontation

What does the rejection hotline say?

What does the term rejection hotline mean?

The rejection hotline is a service begun by Jeff Goldblatt in the early 2000s. Primarily begun as a joke, with a little intent on being serious too, Goldblatt came up with the idea of using the rejection hotline as a way to shake off the amorous advances of others who simply don’t appeal.

What are all the rejection hotlines?