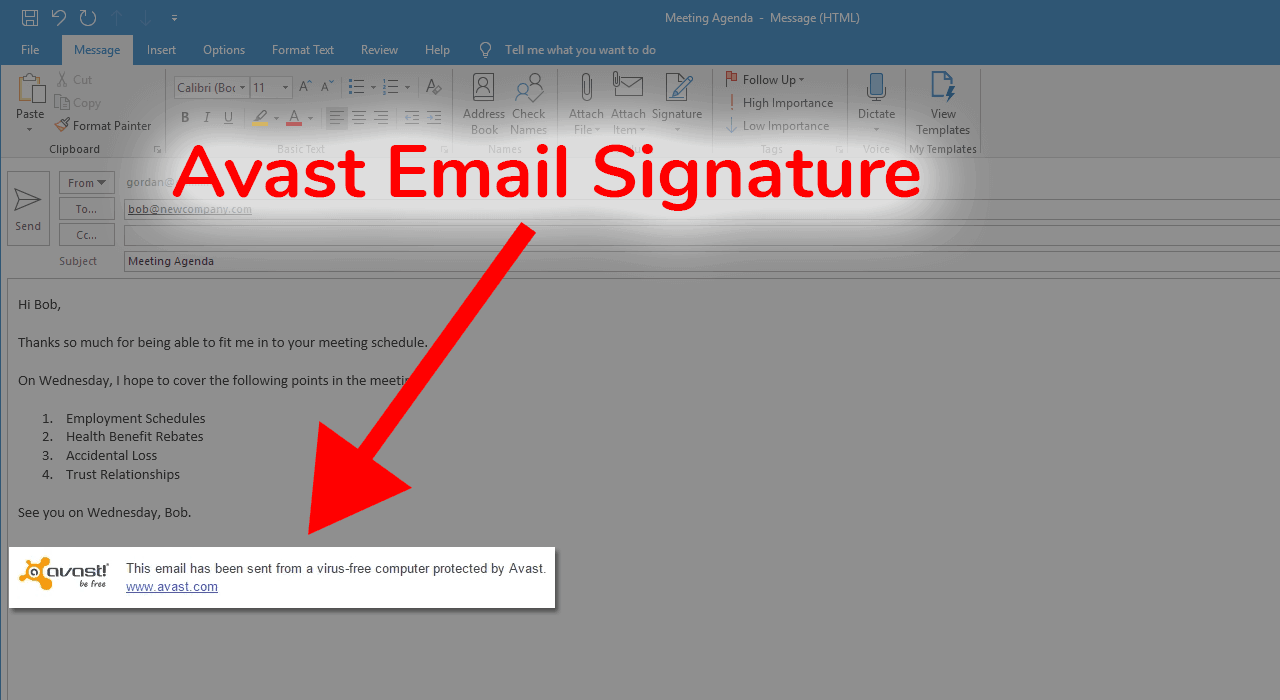 Automated email signatures from your anti-virus software such as Avast can be highly annoying. But did you know that having a professional email signature actually increases the response rate of your emails, whilst promoting your brand?

See also: Shortcut Key To Create A New Folder On Windows And Mac

We have a free email signature generator which you can use to create your own professional email signature in just 5 minutes. That’s 5 minutes to instantly promote your business with every email you send.

How this signature affects you?

For more than a year, I have been using the free version of Avast Antivirus, which I put on all family-owned computers, and, in principle, am happy with everything.

You do not need to buy anything, pick up keys, and steam with the reset of activation, as is the case with any paid antivirus. At the same time, the antivirus protects well, since in so much time I have never noticed any problems with the system and suspicious actions that could somehow suggest that I have virus activity in my computer.

See also: Broadband Hack to Increase the Speed of your Internet Connection

Well, in general, I did not observe any problems with the use of Avast on any computer until recently.

The later version of avast

In general, the next version of Avast Antivirus was released and, of course, I updated all the computers that I maintain to this version. This is the 11th version (at the moment I have is 11.1.2245, which was released on December 1, 2015).

Updated, as usual, I did not notice any problems as before … However, literally on the same day, after updating Avast to the latest version at the moment, I still saw something new for me.

When I sent an email to anyone, right before my signature, avast email signature was inserted at the end of the message:

This message was sent from an uninfected computer protected by Avast. www.avast.com

Strange, I think … Previously, this had never happened before, whatever version it was updating its antivirus. I guessed that it was easy to turn off this signature in the Avast settings.

But I didn’t want to poke around there, and therefore I didn’t sweat at first … Then I began to notice that when I looked at the message, the message first fell on the signature.

Like distracted by it! Then I also think: “Damn, and those with whom I communicate at work and personally via e-mail, after all, Avast’s signatures in my messages certainly pay attention to this and surely it can annoy someone …”. I think it was like that. Because after a couple of days, the beginning began to annoy me too.

Avast antivirus has incredible features and it is beneficial for multiple purposes nevertheless its automatic email signature is quite frustrating for the recipients. Now that you have all the information of your email signature’s protection, we hope that you will easily implement it and use your email hassle-free.

We also suggest you replace your anti-virus software by choosing other brands according to your needs, such as Bull guard, Norton, TotalAV, McAfee, and PC Matic. Share this method for those who are searching for support.

See also: What's the best way to use a scanner for a paperless life?

In case you’re having problems following these steps, ask questions in the comments below.

My research on this email signature

I climbed, climbed on various forums and blogs, found a similar problem with people, and all the “gurus” recommended simply unchecking the option “ Insert note into a” clean “message (outgoing),” which I already tried. And I never found a solution to my problem.

I was already thinking about changing the anti-virus for the future, since such a bright Avast signature in the E-Mail messages sent by me didn’t suit me at all, and some of my interlocutors, I think, too if I do not find it, then in the future I will change this antivirus to another free one. And the solution was found, and here it is …