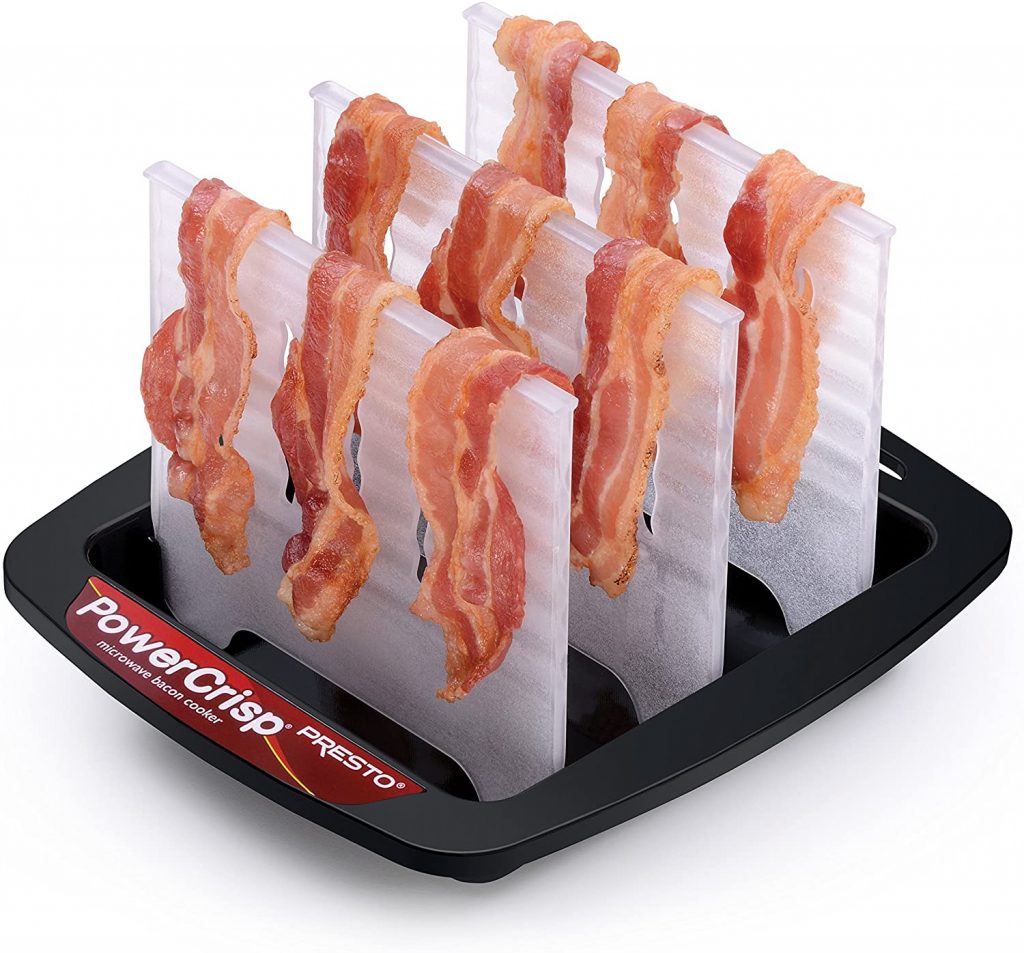 How to Make Bacon in the Microwave Without Drying it Out

How to Cook Crispy Bacon in the Microwave

If you want bacon for breakfast or need it in a recipe but don’t have time to fry it in a skillet, the microwave is your next best option! Believe it or not, it’s possible to cook super crispy bacon in just a few seconds with the push of a button. If you’re wondering how to microwave bacon, follow the steps below.

Watch this video to see how it’s done, and find cooking alternatives if you don’t want to use a paper plate!

How Long to Microwave Bacon

The secret to cooking perfect bacon every time is in how long you cook it. Depending on the number of strips and thickness of your bacon slices, you will need to cook each strip of bacon for 1 minute to 1:30. Two to four strips of bacon will need between 2-4 minutes.

Remember that the number of slices being cooked and the thickness will determine how long to microwave your bacon.

I recommend microwaving 4 slices at a time, no more.

No matter how thick your bacon is, I recommend starting with 2 minutes. Then, continue to cook it in 20-second intervals as needed.

Can you Get Crispy Bacon in the Microwave?

With the help of paper towels, you can get crispy bacon in the microwave. Paper towels help absorb excess grease and provide a surface to make your bacon crispy.

Be aware that you will need to do a little oven clean-up as the oil tends to drain through the paper towels onto the paper plate.

Never microwave bacon directly on a porcelain plate. It will get extremely hot.

How to Microwave Bacon Without Paper Towels

If you don’t want to use paper towels or paper plates to cook your bacon, you can do it by doubling and tripling the paper plates underneath the bacon and one on top to cover the bacon pieces.

Alternately, if you want to reduce waste, feel free to place your bacon in a microwave-safe dish, and follow the cooking instructions listed above.

Now, place another paper towel over the top of the bacon slices and pop the plate in the microwave. Cook on high, starting at 30 seconds per piece. For four pieces, we began with 2 minutes of cook time. For us, that wasn’t quite enough to get them up to a properly crisp texture. However, cook times can be highly variable based on your microwave’s model and age, so start with that 30 seconds per piece metric and move forward from there as necessary.

If your bacon isn’t quite crisp enough after that first round, cook it again at 30-second intervals, checking in between each round until the pieces have gotten crisp. For thick-cut bacon, you will almost certainly need to add in extra time to ensure that the bacon is fully cooked.

Is it healthy to cook bacon in the microwave without paper towels?

Cooking the bacon over a bowl with a plate underneath will help to remove some of the fat from the bacon.  As the bacon is heated, the fat will melt and drip down the side of the bowl and will be caught in the plate, or a dishcloth if you place one underneath. This technically will make your bacon a little bit healthier but remember that bacon is definitely a ‘sometimes food’.  Choose shortcut bacon for the healthiest choice of the bacon range, but keep this food as a treat.

How to bake bacon in the oven

When cooking bacon for a crowd, the oven method is the easiest way to get great results with lots of bacon. Similar to the frying pan method, start with a cold oven.

How to microwave bacon without paper towels

Sometimes it feels a bit wasteful to use handfuls of paper towels for microwaving bacon, especially if you’re doing more than one batch. In that case, the solution is a microwave-safe bowl. Instead of paper towels, place a bowl upside down on top of the plate. All the grease from the bacon will drip down the side of the bowl and collect on the plate, so make sure that the diameter of the bowl is at least an inch smaller than the edge of the plate.

Drape the bacon over the bowl in a single layer and microwave the exact same way as the previous method — 30 seconds to 1 minute per piece.

Can You Microwave Raw Bacon?

Chances are if you are looking to make some bacon for your breakfast feast, you have a package of raw bacon in the fridge.

So, you might be wondering whether or not you can microwave raw bacon? Absolutely you can, just follow the instructions above to crisp it up safely!

See also: Is Sitting With Your Laptop on Your Lap Bad for You?

It takes about 1-2 minutes to cook bacon from raw, but I always recommend checking it after a minute and then cooking it in 30-second increments from there.

Unless you want to spend the rest of your day cleaning your microwave, add one or two more pieces of paper towel on top of the bacon. These pieces will catch any grease as it comes off of the meat, leaving your microwave spotless.

Even before you put them in the microwave, the grease starts to show on the towels. Consider this a good thing because there’s just an endless amount of grease on that stuff.

If you don’t want to use any cloths or paper towels to microwave your bacon, there is a great method that requires a microwave-safe bowl and plate.

In this method, you will place the bowl upside down in the middle of the plate then drape the bacon over the top to cook.

As the bacon cooks, the grease will run down the sides of the bowl and collect on the plate beneath the bowl.

You’ll end up with crispy, crunchy bacon and grease you can easily clean off the plate. Just make sure that the plate has about an inch or so of space around the edge of the bowl to collect the fat.

Follow these steps to microwave your bacon without paper towels using the bowl and plate method:

How Do You Make Bacon In The Microwave

Characterized as one of the most important meals for the day, breakfast has to be something that can help you to have a good start and get the day rolling in the right direction. As we all know, breakfast must be healthy and wholesome, not necessarily bland or tasteless.

Including bacon in your breakfast is surely a good way to add some deliciousness as well as the essential nutrients to your meal. It contains a good source of protein, fat and fiber.

Do you need oil to cook bacon in the microwave?

No, there is no need for oil while cooking bacon in a microwave. This is because the bacon can render fat and release its own grease when it is being cooked.

Additionally, bacon can be more crispy without oil as well as being quite healthy when the fat is melted out of the meat. As a result, it is an integral food item frequently eaten in many dishes.

Can you cook bacon in the microwave with water?

Generally, water is added while cooking the bacon to make it slightly chewy. Also, the water helps strips of bacon hold their shape in a better way.

You can try to make bacon in the microwave by adding water, but you cannot use the paper towel then.

Use a microwave proof dish that is shallow and long enough to lay the bacon inside, this pyrex dish works perfectly. Cover the bacon with an inch of water and microwave for 2 minutes or until the water begins to boil.

Can you cook bacon in the microwave without paper towels?

Yes, you can cook the bacon in the microwave without the use of paper. However, this requires a bit of ingenuity and increased potential for a microwave mess.

You have to lay a microwaveable plate in the microwave, and then place a microwave safe bowl upside down on top of plate. Drape the bacon strips on this bowl and microwave until desired texture is reached.

The unhealthy and excess grease will flow away from the bacon, directly on the plate, keeping the bacon crispy. There is potential for splatter inside the microwave, so you will want to wipe the inside of the appliance afterwards.

What else can I use instead of paper towels to microwave bacon?

You could line the base plate with all sorts of things to catch the oil, try these below:

Microwaving bacon is easy, though there is a correct way to do it. Simply follow a few steps and you'll have delicious bacon in just a few minutes.

Arrange six bacon slices side by side on the towels. Make sure the bacon doesn't overlap or the slices won't cook evenly.

Cover the bacon with another microwave-safe paper towel to prevent splattering.

Microwave the bacon for 3 minutes on high power and rotate the plate so the bacon cooks evenly. Cook for another minute.

Check the bacon; it should be an even golden brown color. If it still looks transparent, cook it for another 30 seconds, watching carefully.

Remove the bacon from the plate and let it rest on a fresh paper towel for 2 to 3 minutes to drain off the excess fat.

Use the bacon immediately.

How Long to Cook Bacon in Microwave

Here’s a cook time chart for regular bacon in the microwave on high power:

Use the low end of the ranges above to get chewier bacon and the full time for crispier bacon.

For thick-cut bacon, it’s quite a different story. Use the following guidelines:

Now you know how to cook great bacon, find heaps of brilliant bacon recipes below and get cooking. Don’t forget that if you have a myfoodbook account you can save these recipes to your own personalised cookbooks to share or print!

How to Microwave Bacon

1. Line a plate with paper towels.

Line a microwave-safe plate or dish with two paper towels.

Arrange as many bacon slices as you can fit in a single layer on top of the paper towels, making sure none overlap.

Optional: If you have more bacon to cook, you can stack another layer of bacon on top of this layer of paper towels. Just be sure to add a final two layers of paper towels on top to prevent splatters.

Microwave on high for 3-4 minutes. Check the bacon. If it still looks translucent, continue to cook in 30 second bursts until it's as crispy as you like. With time, you'll be able to more accurately estimate how long it takes to cook bacon in your microwave.

Carefully remove the plate from the microwave (using oven mitts or a towel), transfer the cooked bacon to a fresh layer of paper towel, and drain for about two minutes. You can pat with an additional towel to absorb excess grease.