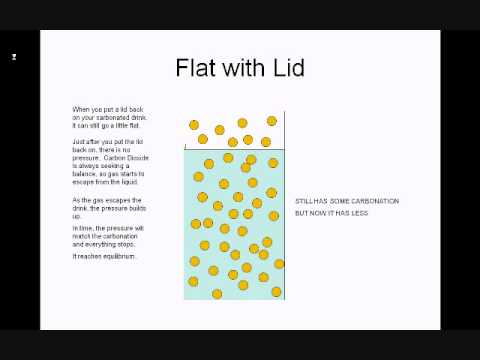 Most of us are familiar with the tingly bubbles that are felt when drinking sodas, sparkling water and other carbonated beverages.  The active ingredient being CO2 or carbon dioxide.  CO2 is a colorless tasteless gas which is naturally occurring in our atmosphere and experienced in our every day life.  We breathe it out, plants absorb it in.  We have put it in our drinks for hundreds of years.  However, there is a major difference between how how these sodas are carbonated in comparison to naturally carbonated drinks like beer and kombucha.

For sodas, the manufacturer puts the product through a process called forced carbonation.  This is where carbon dioxide is injected and dissolved in to the liquid.  At the root of force carbonation is two simple requirements:

Carbonation intensity is influenced by the amount of pressure that is applied to the liquid.  If the gas is forced in to a liquid in a contained environment, the more pressure built up from CO2 will result in more being dissolved in to it.  It is important that there are no opportunities for the gas to escape from the container in order for the CO2 to be efficiently and completely dissolved.

See also: How to get quarters from Bank of America

Low temperature is also an important factor in dissolving CO2 in to a drink.  CO2 is dissolved much more efficiently in cold liquid than it is in warm liquid.  This means that intensity of the carbonation is dictated by the temperature in which the CO2 is being dissolved.

Think of it like trying to dissolve sugar in to cold or hot water.  At hot temperatures, the sugar melts and dissolves in to water much quicker than if you were trying to do the same thing in cold water.  Dissolving CO2 is the same principle except in opposite temperatures.  Soda makers recommend force carbonating at 45° Fahrenheit or 8° Celcius to have optimal results.

At 8° Celcius, a litre of water can absorb about 0.1 ounces (or 3 grams) of CO2. At a temperature of about 15°C, that falls to just over 0.07 ounces (about 2 grams).  This means that at 8° Celcius there is a 50% improvement in the ability to absorb carbonation with only a 7° change in temperature.

WHAT IS A SODA FOUNTAIN?

The device combines flavored syrup or syrup concentrate and carbon dioxide with chilled and purified water to make soft drinks, either manually, or in a  vending machine which is essentially an automated soda fountain that is operated using a soda gun. Today, the syrup often is pumped from a special container called a bag-in-box  (BiB).

Making Your Own Carbonation System

The Mechanism Behind SodaStream 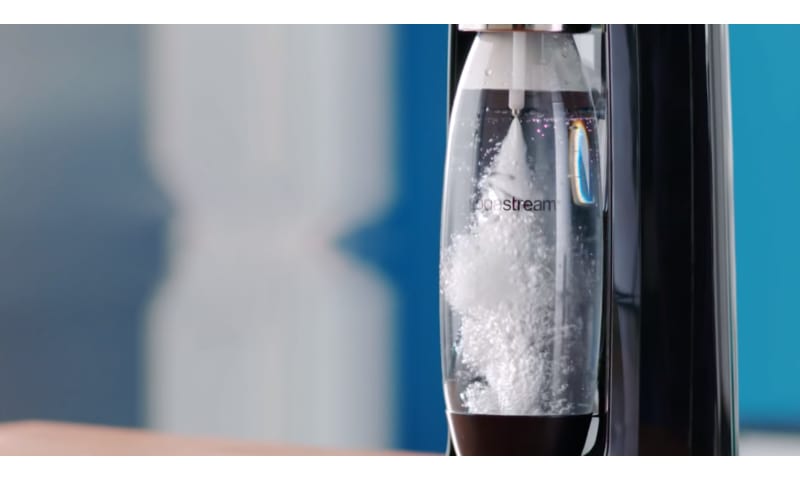 Using SodaStream is easy enough. Just load the CO2 canister in the machine to engage the cylinder’s top with the soda maker’s button.

Fill the carbonating bottle with water and secure it tightly in the nozzle. Remember that the nozzle must poke the water. You’ll know how much to fill since SodaStream bottles have a fill line.

From here, all that is left to do is to press the button. When you press it down, the valve of the CO2 cartridge opens, allowing the gas to travel from the cylinder through the air hose, then the nozzle, and straight into the bottle.

The LEDs light up at the same time when the button is pressed. When the button is held down, a buzzing or hissing sound is heard, indicating that it’s time to release it. When you release the button, the valve closes so the gas doesn’t come out.

Some automatic SodaStream models pump on their own and only require a single push of the button for the soda maker to recognize the level of carbonation you want. After carbonating, remove the SodaStream bottle from the nozzle and enjoy your sparkling drink.

What Is Natural Carbonation?

Another way to use natural carbonation is in the bottle. In this case, the beer is allowed to ferment completely. It is left unfiltered which leaves active yeast suspended in it. Then a small amount of sugar is added at bottling time. Once the bottles are sealed and the yeast begins to act on the sugar, carbon dioxide is released and absorbed by the beer.

Why Do Sparkling Beverages Seem Acidic? 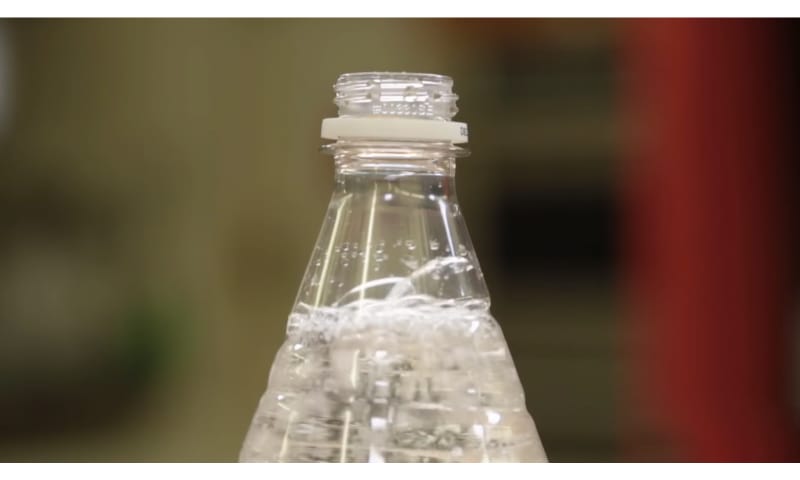 When carbon dioxide is incorporated into water, it alters the taste due to the carbonic acid (H2CO3) formed when CO2 is dissolved in the water. This acid is relatively weak, but it is necessary to add that sharp tone that compliments the drink. It also contains an antibiotic property that prevents bacterial growth in the water.

Beer must be fully sealed with a tight bottle cap to maintain the carbonation. A tight bottle cap ensures that no carbon dioxide can escape until the beer is opened. Once a beer is opened, it should be drunk within a few hours. Any longer than that and the beer will taste much different than you expected. The carbonation will be gone (also known as “going flat”) and it will not be enjoyable. Most beers with low alcohol by volume (ABV) percentage, can be stored unopened for about 6 months. After that, they risk going flat. Most beers with a higher ABV number are made to age, so leaving them unopened for a few years actually improves their flavor. Beers with higher ABVs that can be aged include lambic or stouts.

We are a participant in the Amazon Services LLC Associates Program, an affiliate advertising program designed to provide a means for us to earn fees by linking to Amazon.com and affiliated sites. We aim to give the highest value possible to our readers. JikoniTaste.com is independently owned and the opinions expressed here are our own.